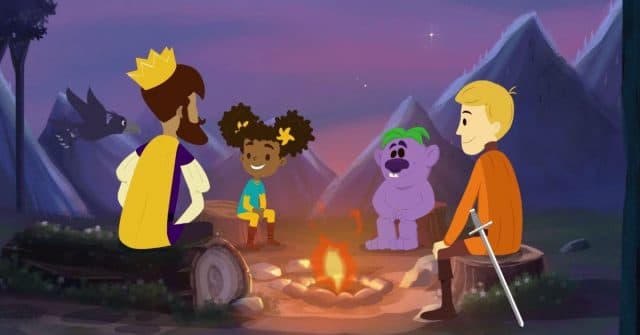 Hulu is set to break boundaries with its upcoming children’s TV show The Bravest Knight, which will see gay characters in the lead roles.

Based on the Daniel Errico book of the same name, the animated series centres on Sir Cedric (voiced by former Grey’s Anatomy actor T.R. Knight), his husband Prince Andrew (Star Trek: Discovery‘s Wilson Cruz) and their adopted 10-year-old daughter Nia, played by A Wrinkle in Time breakout Storm Reid. In the show, Cedric looks back on his humble beginnings as a pumpkin farmer and relays to Nia how he used his ethics, compassion and, of course, dragon-slaying skills to become one of the most respected knights in the kingdom.

Inspired by the exciting adventures her father got up to in his youth, Nia and her trusty troll sidekick Grunt (Bobby Moynihan) put a plan in motion to make her a knight too.

When it comes to television shows aimed at younger audiences, LGBTQ+ characters have largely been excluded from the narrative. Recently however, Arthur, the long-running series about an anthropomorphic aardvark, aired an episode that saw the titular character’s teacher Mr Ratburn get married to a male mouse.

While the inclusivity was praised by many, the Alabama Public Television board deemed the instalment “inappropriate” for small children and therefore banned it from airing anywhere in the state. The ruling came after 18,000 people signed a petition calling for PBS to pull the “controversial” episode.

“I am outraged that PBS Kids would use their children’s network to promote same sex marriage,” the online campaign read. “It is offensive to me and my family that the network would glorify the homosexual lifestyle.

“Until PBS Kids agrees to no longer air this episode ‘Mr. Ratburn and the Special Someone,’ or others with same sex couples, then conservative families including my own will have no choice but to discontinue watching PBS Kids Network, even avoiding previews, commercials, and reruns.

“Please cancel this controversial content immediately. You will not have my support as long as you continue to veer away from family-friendly entertainment.”