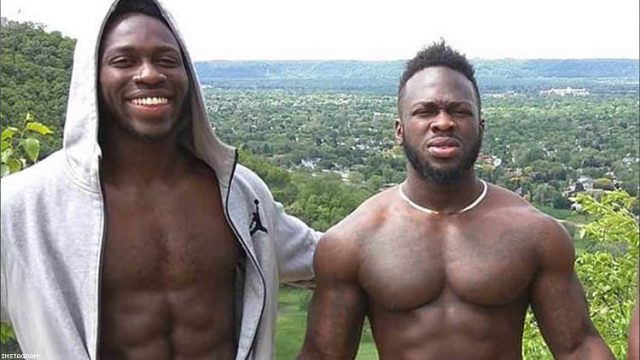 Ola and Abel Osundairo, the two brothers allegedly involved in an attack against actor Jussie Smollett were seen leaving a grand jury room to talk to prosecutors on Tuesday, CBS News Chicago reports.

It was also reported that the two men were recorded in a car from a ride-sharing app, presumably on their way to the scene of the incident. The Osundairos seemed nervous during the car ride, sources told CBS.

Last month, Smollett reported to police that he was attacked in the early morning hours of January 29, when two men approached him and attacked him on the street in Chicago near his home telling yelling “This is MAGA country.”

Smollett said the men also slipped a rope around his neck and poured a chemical substance onto him while calling him racial and homophobic slurs, which prompted a hate crime investigation by local law enforcement. Chicago police took two men into custody on Wednesday but they were released Friday evening. Since the brothers went into police custody, more information has come out alluding to Smollett potentially orchestrating his own attack. CNN reported on Saturday that at least one of the brothers reportedly worked on Empire as an extra, and are now fully cooperating with law enforcement.

The brothers’ attorney, Gloria Schmidt, says they have provided evidence to Chicago PD to corroborate that Smollett was involved in purchasing the rope, according to CBS. New details published Saturday by CBS say the men were paid $3,500 by Smollett to stage the attack, which they had rehearsed days prior. After the attack, the brothers fled for Nigeria and returned days later. They say Smollett was supposed to pay them an additional $500 upon their return, CBS reports.

A spokesperson for the department told CBS after the bothers were released that the detectives on the case “have additional investigative work to complete.” The Advocate reports that Smollett has retained two criminal defense attorneys to represent him in light of allegations that the attack may have been coordinated. According to a spokesperson for Smollett, one of the brothers was Smollett’s personal trainer, and therefore, “it is impossible to believe that this person could have played a role in the crime against Jussie or would falsely claim Jussie’s complicity.”

The story of the attack also brought on doubt from others. Earlier this week, Smollett responded through a spokesperson to rumors that he may have been lying about the attack in a statement saying that he “is the victim here, which has been stated by the Superintendent of Police.”

Though Smollett’s case has been met by skepticism by some, hate crimes against LGBTQ+ people are generally on the rise and have become more severe. Shortly after news of the attack broke in late January, the New York City Anti-Violence Project released a statement emphasizing that “Jussie is not alone” in his experience. Gay Black men are among “some of the most vulnerable to violence in the LGBTQ community.”

Correction: This story has been updated to clarify that Ola and Abel Osundairo met with prosecutors on Tuesday, and did not, in fact, go before a grand jury as CBS’s Charlie Del Mar initially reported.