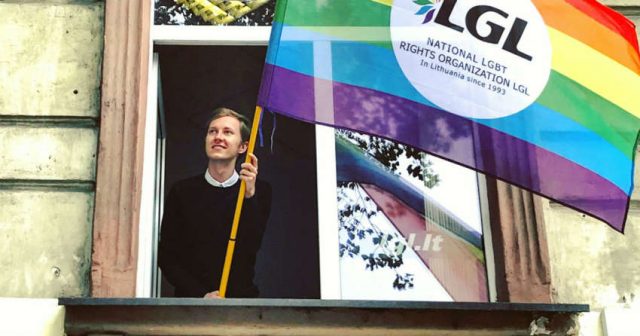 The 12 June 2016 was the day that tore me in half. Nearly 12 months after the US Supreme Court issued a ground-breaking that outlawed the ban on same-sex marriage as unconstitutional, the deadliest assault to target the LGBTI community took place at a . I was in Vilnius, Lithuania, that night, organizing the third-ever Baltic Pride ‘March for Equality’ events.

My father rang me on the pbone.

‘I heard what happened in Orlando,’ he said. ‘We are worried about you. But I want you to know that regardless of who you love, we support and are very proud of you.’

His words stood in sharp contrast to what I was used to hearing from my father as a child. He never really understood the idea behind Gay Pride. Like most Lithuanians, he believed that homosexuality was ‘unnatural’ and should not be acceptable. 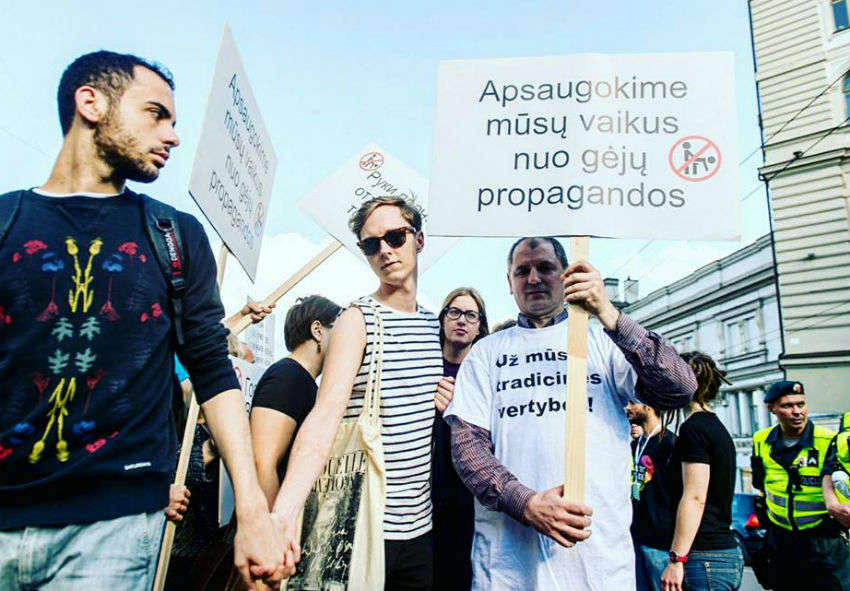 An anti-LGBTI protestor holds a placard at Baltic Pride in 2016 saying ‘Save our children from gay propaganda’ (Photo: Edvard Blaževič)

I haven’t talked about my sexuality with my father since the day of the Orlando attacks. Perhaps by then he already realized that my future aspirations lay with the rainbow-coloured flags and feathers and he didn’t want to fight back.

Little did he know, that two years later, I would be on the frontline of the battle for LGBTI rights in Lithuania as I joined the National LGBT rights organization, .

I never saw myself living in Lithuania, mainly due to widespread homophobia and the culture of bullying. But it wasn’t just me. Research shows, that 90% of Lithuanian high-schoolers in Lithuania are thinking of emigration after graduation for exact same reason.

In light of this, it comes with no surprise that Lithuania faces one of the greatest demographic problems in the European Union.

Yet despite all the fears, I decided to move back after years of academic pursuit abroad. I joined LGL with a sense of pride, followed by a feeling of insecurity. It soon became evident that there was a perfect reason for it.

In the early hours of 10 August last year, the entrance to the headquarters of LGL was set on fire.

The very same night, an arson attack took place outside the apartment of the founder of LGL.

A week later, the doorstep of an openly gay activist and filmmaker was set aflame in the new town of Vilnius.

It became clear, that this wasn’t a one-off event, but a series of strategically coordinated hate crimes targeting the LGBT community.

To date, no suspect responsible for the attacks has been identified.

Article 60 of the Lithuanian Criminal Code prohibits hate crimes and hate speech on the grounds of sexual orientation. However, the response from the police officers in the aftermath of the arson attacks proved that there is a huge lack of understanding of what constitutes hate crime and how to effectively identify it.

Not only did officers refused to file the alleged bias-motive behind the attacks. They went so far as to suggest to take down rainbow flags, ‘before the whole house was burnt.’

The majority of bias-motivated crimes suffer from inaccurate offence classification, often labelled as mere hooliganism instead.

Law-enforcement officials refuse to believe the extremely low numbers of hate crime reports do not reflect actual rates of homophobic or transphobic attacks in the country.

As a consequence, it feeds into the lack of trust between general population and law-enforcement authorities.

However, such rationale reflects the wider problem of prejudice against LGBT people in Lithuania.

According to Eurobarometer, only 14 per cent of Lithuanians would feel comfortable with or indifferent to public displays of affection between same-sex couples. Only one in four people would intervene if they witnessed an LGBT person attacked in public.

Despite discouraging views, the growing public consciousness of the struggles that LGBT people face provided for a number of positive developments in recent years.

Thanks to strategic litigation efforts at LGL and pressure from the European Court of Human Rights, transgender people are finally being granted the right to legal gender recognition without having to undergo gender reassignment surgery.

In January, the Constitutional Court ruled that foreign same-sex spouses have as the concept of family is ‘gender-neutral, and cannot derive solely from the institute of marriage.’

Peculiar though it may sound, Lithuania – being one of the most homophobic country in Europe – was the first country to provide refuge to gay victims of state-sponsored persecution of homosexuals in Chechnya.

This year marks the 50th anniversary of Stonewall Riots that gave birth to the modern gay liberation movement. To celebrate this and to stand against the rising phenomenon of hate-motivated crimes, the fourth Baltic Pride ‘‘ takes place in Vilnius tomorrow (8 June).

Despite the infamous ‘anti-gay propaganda’ law, more than 10,000 people are expected to take part.  LGBTI rights activists anticipate ‘the most political Pride’ of the year.

If there is one thing I’ve learned in recent years, it’s that there is no country in the world where LGBT people are free from discrimination and prejudice. Neither should the advancement of LGBT rights be taken for granted.

The Pulse/Orlando massacre in the US, arson attacks in Lithuania, the criminalization of homosexual relations in Uganda and the extermination of perceived homosexuals in Chechnya: These are but a few examples of increasing polarization around LGBTI rights worldwide.

They offer a gruesome reminder that the uphill battle for the rights of our fellow citizens is worth it. Even if it sometimes comes at a cost that seems almost impossible to bear.