Home Gay Life This man’s dad came out as gay and became the UK’s biggest... 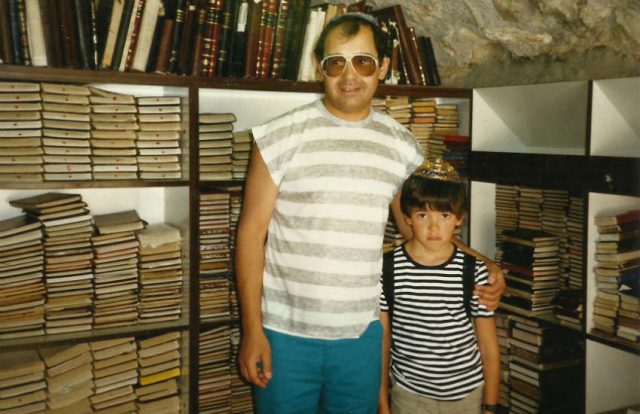 How well do we really know our parents?

We spend most of our lives picturing them as just caregivers, protectors – and extensions of ourselves. Then as we grow up we realize they aren’t an infallible authority, but human beings with their own desires, feelings and faults.

For James Lubbock, now 41, everything he thought he knew about his parents shattered over the course of a few years.

It started with his dad coming out as gay and ended with his father going to prison, after being busted with one of the biggest crystal meth hauls in UK history.

‘I think when you’re so close to someone, you don’t actually see it. For me, he was my dad,’ James said.

The story is detailed in James’ shocking, emotional book, . His father, Richard, came out as gay shortly after James left university in the early 2000s. Reeling from this revelation, James visited his mom (separated from Richard), trying to make sense of it all.

Then his mother came out as a lesbian.

‘I felt happy they could live their lives and be true to themselves for the first time,’ James said. ‘I felt sadness that they lived a lie during a large part of their life.

‘Also, it was a bit strange, because there was this existential feeling. I thought that, if my parents existed in later generations where homosexuality was legal, then I wouldn’t exist.’ 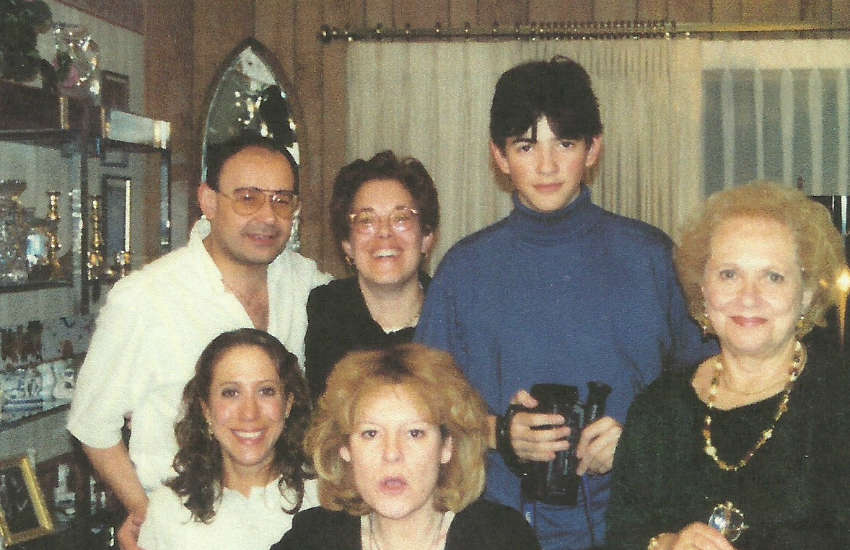 Richard, Marilyn and James in the US

The peculiarity and enormity of the situation isn’t lost on James, who at the time was 24-years-old. While it’s a big deal for his parents to be able to be true to themselves, the complete upheaval of a child’s life – even an adult child – is not a trivial matter. He could’ve reacted two ways: acceptance or homophobia.

Luckily, James accepted his parents’ new directions in their lives. It even changed the way he looked at LGBTI issues.

‘With my parents being gay, it made me more conscious of gay rights. I started to get angry at countries that had laws against homosexuality and certain attitudes from a religious point of view,’ James said.

‘In the Jewish community [of which the family is a part of], it’s even tougher, because it’s a quiet, sort of conservative community.’

Despite coming out at the same time, the parents took drastically different paths. His dad started going out to nightclubs. In the days before dating apps or Grindr, this was one of the only ways to meet men.

As his dad embraced the looser side of being gay, his mother, Marilyn, fell in love with a woman called Ruth.

‘On my mum’s side, honestly, it’s just an amazing love story. I’m still very close with Ruth. She has been a gift, really.

‘I was expecting when I first met her to be this butch, shaven head, sort of lesbian, when my mom’s quite feminine. And then [when I saw her] it completely changed my perception. We got on straight away. They both fell in love.

‘I love my dad. But this was a proper loving relationship. It was so happy and stable.’

Unfortunately, this love story does not have a happy ending.

So Marilyn finds the love of her life. She stays friends with her ex-partner, Richard, and they even meet up for their wedding anniversary every year. James tells me his dad used to toast to their ‘best year yet’ at each anniversary. 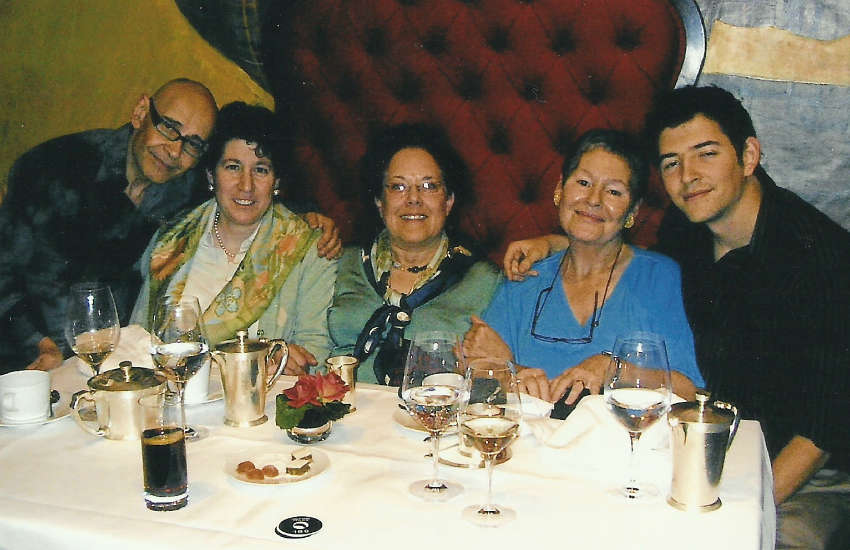 But after spending his life trapped in the closet, Richard burst out.

James said: ‘It was a bit of a bizarre situation where I realized that we were going out clubbing at the same time and he was taking the same amount, if not more, drugs than me.

‘But I was happy for him because he was exploring this new world.’

Richard didn’t drink, but he started taking MDMA. James, a young man, saw the upsides to this. After all, he now had a fun dad and a steady supply of ecstasy for parties. However, this was not the only avenue Richard was exploring: he dove in the deep end of sex.

At one point mentioned in the book, James visits his father’s flat with a McDonald’s. Rather than a simple meal with his dad, he walks in on a multi-man gang bang.

As traumatic as that would be for the rest of us, this wasn’t what pushed James over the edge. Richard took more and more drugs. He moved from E to crystal meth, and shifted from just taking to selling. In fact, using his skills as a businessman, it wasn’t long before he sat at the head of a drug empire.

James has an idea: ‘He was a successful businessman. He didn’t need the money. It was a way to meet men.

‘He would go to clubs and men would come up to him and start chatting. But he was very shy and very uncomfortable. As an older man he just didn’t know how to continue the conversation.

‘Then he noticed that when he went to his drug dealer at the time, the dealer was the focal point in that group dynamic. He was sort of leading it and got a lot of attention.’

By this point Richard was a meth addict. If this wasn’t hard enough on James, his mum was diagnosed with ovarian cancer.

Father and son are both heartbroken. Richard spirals out of control – Marilyn was his emotional rock and without her, there’s nothing holding him back. He sells more drugs and stops taking precautions, leaving a trail of evidence in the path of his grief. James’ mental health crashes and he reaches rock bottom.

‘At one point he offers [crystal meth] to me. And I take it. I have it a few times after that as well.

‘Part of the reason I did that was because my reference points are falling away. My mom’s died. Then I also felt that he was done, he was dying, the meth was killing my father.

‘He only had a certain amount of time left to live. So let’s spend as much time with as possible. Father-son quality time, even though it’s dysfunctional.’ 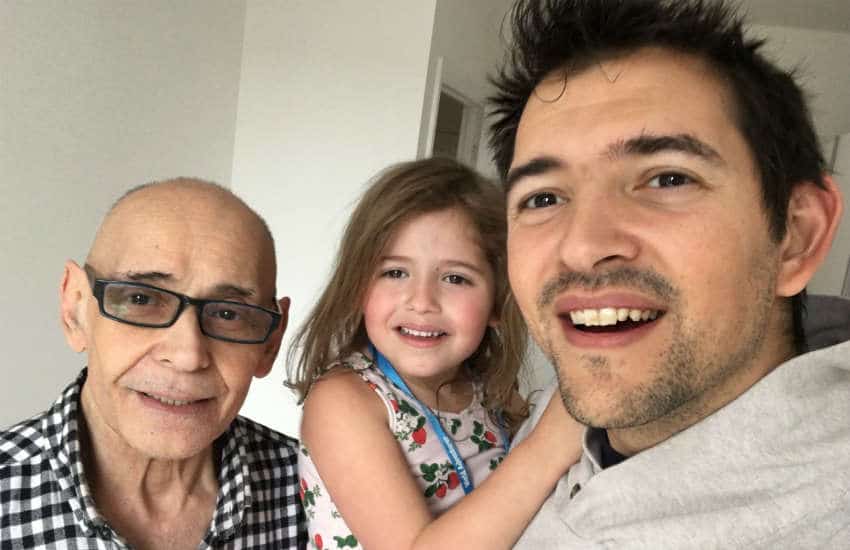 James is now married with a daughter, Mia

However, this couldn’t continue. James faced two options: cut him out of his life and maybe never see him again, or report him to the police and let him face the wrath of prison. He chose neither – unable to make decide his father’s fate.

Eventually, the law caught up with Richard. Police found £1.5 million worth of meth and other drugs in his flat in 2009, which is believed to be the biggest meth bust in the UK at that point. He admitted to dealing and was then jailed for eight years.

Richard missed James’ wedding to his now-wife, as well as the birth of his granddaughter.

But James insists being caught by the police was the best thing to ever happen to his dad – and their relationship.

‘Even though him being arrested was traumatic, it was a relief. Because it saved his life. He called me up the day he was arrested from prison.

‘His voice was back to normal. I could just tell. He didn’t just survive in prison. He re-found himself.’

James Lubbock’s full story is in his book .