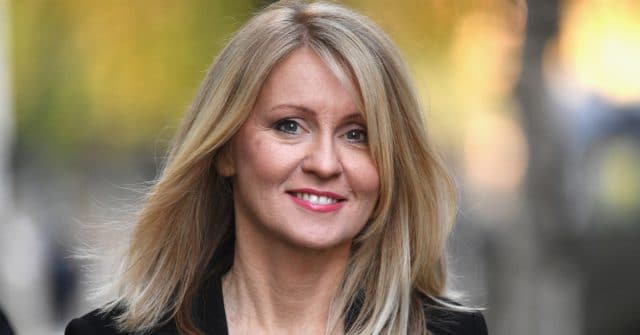 Esther McVey has waded into the row on LGBT-inclusive education in Birmingham schools, as she sets out her manifesto for the Conservative party leadership.

The Tory MP is one of 11 MPs vying to become party leader and consequently Britain’s next prime minister.

Speaking to Sky News on Thursday morning (May 30), she said that teaching young children about LGBT relationships is a matter for parents.

“I believe parents know best for their children,” she said. “While they’re still children—and we’re talking primary school [age]—then parents need to have the final say.

The row over LGBT-inclusive education has been ongoing since March, with parents from mostly Muslim communities staging protests outside of schools and withdrawing children from lessons which mention same-sex relationships—but not sex.

Parents demonstrate against the No Outsiders programme at Parkfield Community School on March 21 in Birmingham. (Christopher Furlong/Getty)

“McVey ignorantly helps legitimise the myths around relationships and sex education, at the same time that Dominic Raab has targeted the trans community.” he told PinkNews.

“The Tory leadership contest seems to be shamefully descending into a competition of who can out-right wing each other by promoting intolerance against the LGBT+ community.”

“What a terrible message to send to young people growing up LGBT+.”

Parkfield School, the site of the first wave of protests, has been forced to deny that children were being given lessons on gay sex.

“It’s very clear that we would never, ever discuss sexual activity with very young children at all,” Hazel Pulley, the school’s CEO, told BirminghamLive on March 27.

On Thursday (May 30) it was revealed that attempts to mediate between parents and officials have broken down.

Human rights lawyer Nazir Afzal, who was brought in to broker an agreement between the two sides, has placed blame squarely at the feet of Government.

“The Government has been cowardly,” he told BirminghamLive.

“They have failed to lead and own this issue (around equality teaching), leaving the burden unfairly on the shoulders of head teachers. It is disgraceful.”