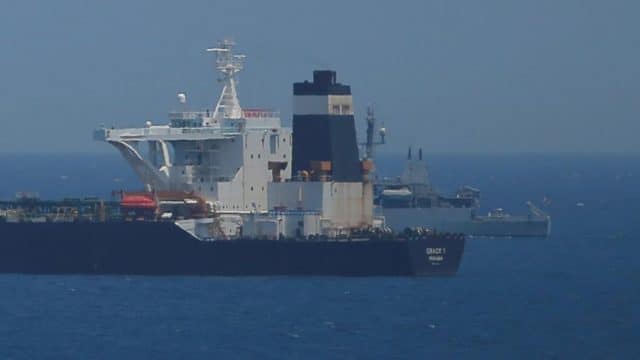 British Foreign Secretary Jeremy Hunt said the Iranian tanker detained by British forces near Gibraltar 10 days ago could be released, if the UK receives a guarantee that the oil is not bound for Syria.

It followed what he called a “constructive telephone call” with Iran’s foreign minister Mohammad Javad Zarif.

“If we get the guarantees that it is not going to go to Syria, then we can resolve the situation following due process in the Gibraltarian courts,” Hunt said.

He added that it was “encouraging” to hear from Iran that “they have no desire to escalate this situation, they want to resolve it as well and that’s what we want to do.”

Earlier this month, Britain raised the threat to its shipping in Iranian waters to “critical”. A day later, Iranian boats attempted to stop a British oil tanker in the Gulf of Oman before being warned off by a Royal Navy ship, according to the UK Ministry of Defence.

Tensions have been high since June 13 when two tankers were damaged by explosions in the Gulf of Oman, a strategic waterway crucial to global energy supplies.

It was the second time in a month tankers have been attacked in the region and came amid escalating tension between Iran and the United States.

The US accused Iran of being behind the attacks, but Iran insisted that it had “no connection with the incident.”