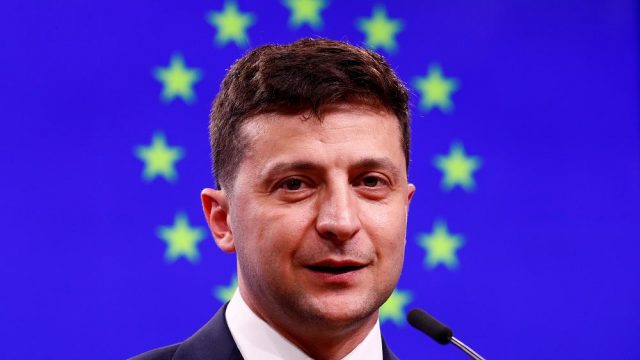 Ukraine will head to the polls on Sunday to elect a new parliament, three months after former comedian, Volodymyr Zelenskyi, was elected president.

Lack of support in parliament has meant the political outsider has been unable to enact his agenda or appoint cabinet ministers, which have to be approved by lawmakers.

Who are the main parties in this election?

Zelenskyi’s Servant of the People party is expected to win with the latest polls crediting it with between 40% and 50% of the vote — not quite enough for an outright majority.

The party is banking on anti-establishment sentiment, promising that its MPs will be newcomers.

Since he was elected, Zelenskyi has taken a pro-Western course and promised economic reforms but has drawn controversy for his ties with oligarch Igor Kolomoisky, whose television channel aired Zelenskyi’s show.

The President has also promised radicals reforms in the judiciary, police and electoral law and this boost confidence in the Ukrainian state.

Servant of the People’s nearest rival is the pro-Russian Opposition Platform — For Life party, polling up to 13%, with support primarily coming from the east and the south of the country. It has pledged to improve relations with Moscow and proposed granting autonomy to the conflict-ridden eastern provinces.

According to Europe Elects, a poll aggregator, the party — chaired by Ukrainian oligarch Viktor Medvedchuk who was put on US and Canadian sanctions list over the Crimea crisis — is anti-EU and anti-NATO and “aims to cancel numerous laws, passed by the current convocation of Parliament.”

Who else is in the running?

In order to have representation in the parliament, named Verkhovna Rada, parties need to secure at least 5% of the vote. Only 225 of the 424 seats will be distributed under party lists with the remaining 199 seats attributed through a first-past-the-post system.

Projections show that another three parties could pass the necessary threshold.

Petro Poroshenko’s European Solidarity is expected to secure between 8 and 10%, which should grant it up to 50 MPs. The centre-left party currently has the largest delegation in parliament with 127 lawmakers.

Pollsters put centre-right Fatherland party, led by former prime minister Yuliya Tymoshenko, next with between 7 to 9% of support, which would give it a few more MPs than its current 21.

Holos (Voice), a political party created in May by famous Ukrainian musician Svyatoslav Vakarchuk, is also expected to enter parliament with up to 8% of the vote.

Meanwhile, the Opposition Platform splinter group, Strength and Honour, led by the country’s former security chief, Ihor Smeshko, could get 3.6% of the vote.

These results, if confirmed, could see several parties completely wiped out of parliament including the left-wing Revival and Self Reliance parties as well as the right-wing Radical Party.

Why is this election important for the rest of Europe?

Most of these parties stand on the pro-Western platform, promising long-awaited reforms to boost the economy and tackle corruption.

According to the World Bank, growth in Ukraine will slow to 2.7% in 2019 from 3.3% last year and could deteriorate further if “swift progress on key unfinished reforms” is not implemented.

Since 2014, the EU has given more than “€15 billion in grants and loans to support the reform process, with strong conditionality on continued progress,” according to the bloc’s External Action service.

Trade between the EU and Ukraine is also growing. Nowadays, 42% of the country’s exports are to the EU, while 49% of its imports originate from the bloc.

Relations with Russia are also at the core of the President’s agenda. Zelenskyi, who has vowed to continue moving the country closer to EU and NATO integration, has said he would aim to achieve a ceasefire with Moscow.

Earlier this month, he said he would welcome talks with Putin in Minsk — where a ceasefire treaty was signed in 2015 — in which Germany, Britain, the US and France would also be involved.