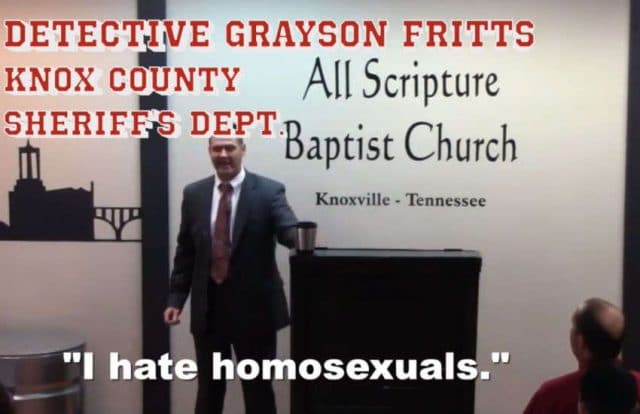 A police detective in Tennessee is on leave after it emerged he gave a church sermon angrily calling for the execution of LGBTI members.

The shocking sermon, given last weekend by Knox County Detective Grayson Fritts, was exposed by a local newspaper.

Fritts is also a pastor at All Scripture Baptist Church in Knoxville. He told the congregation on 2 June that he believes government officials should arrest, try, convict and execute members of the LGBTQ community, the Knoxville News Sentinel reported.

In a video clip of the sermon Fritts repeatedly says he hates homosexuals. He then tells the congregation they should hate the LGBTI community, too.

Digital media outlet the Tennessee Holler posted the video on its YouTube page.

‘The Bible says the powers that be are ordained of God and God has instilled the power of civil government to send the police in 2019 out to these LGBT freaks and arrest them,’ he said during the sermon, WVLT reported.

‘Have a trial for them, and if they are convicted then they are to be put to death … do you understand that? It’s a capital crime to be carried out by our government.’

After the sermon came to light, Sheriff Tom Spangler issued a statement saying the county and Fritts had come to an agreement on a buyout offer, which Fritts had requested before the 2 June sermon.

The detective will be on paid sick leave until it takes effect on July 19, the News Sentinel reported.

Fritts appeared unfazed by the controversy at his church Wednesday night, saying he is just ‘preaching the Bible.’

Meanwhile, the Knox County Attorney General’s Office said it is investigating complaints about Fritts‘ past cases and all pending cases involving him as a witness.

‘I find this speech personally offensive and reprehensible,’ Charme P. Allen said in a statement. ‘As district attorney, my constitutional obligation is to protect the integrity of the justice system.

‘When any potential witness in a criminal proceeding expresses an opinion of hatred and/or bias towards a class of citizens, I am ethically bound to explore that witness’ credibility.’