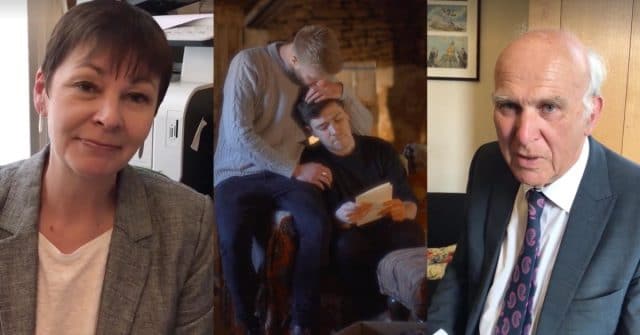 Northern Ireland remains the only part of the UK not to allow same-sex unions, five years after marriage equality was introduced in England, Scotland and Wales.

Now, a filmmaker who was kicked out of the Irish Presbyterian Church for being gay has launched the #LoveIsAllWeHave campaign, hoping to put an end to the discrimination.

Matt Hyndman created an emotive short film for the campaign, telling the story of a young gay Northern Irish man finding a letter from his late mother. She tells him to fight for his love to be “recognised in the same way mine was.”

Hyndman and the campaign group Shape History are now calling on politicians, celebrities and members of the public to post their own video in support of marriage equality.

Cable is one of the first to lend their voice to the campaign.

“One of the big victories in Britain in recent years has been the move to marriage equality,” he said in a video shared to Facebook on Monday (June 10).

“It was a hard fought battle but we got there and it’s made Britain a much better place. We now have to achieve the same result in Northern Ireland.”

Former Green Party leader Lucas shared her own message, saying: “LGBT+ couples want to get marriage for the same reasons that straight couples do, love and a celebration of commitment.

“They’ve been able to do it in Britain for the past five years, so it’s time Northern Ireland caught up.”

Hyndman serves as creative lead at Shape History, which also led the #Out4Marriage campaign in 2012.

Born in Ulster, Hyndman was removed from his church after he accidentally outed himself by forwarding a WhatsApp thread between him and his now boyfriend to about 100 people.

Now living in London, he said that the introduction of marriage equality would be “such a great moment for young LGBT+ kids in Northern Ireland.”

“To know that in the eyes of their community they are equal, valued and loved,” he continued.

“We deserve the opportunity to have our relationships celebrated in our communities.”

“We deserve marriage equality to finally reach the shores of Northern Ireland.”

Northern Ireland has been without a functioning government since January 2017.

Before its National Assembly was suspended, Stormont had voted five times on marriage equality between 2012 and 2015.

It passed by a slim majority on the most recent attempt, but was blocked by the DUP using a mechanism designed to ensure all legislation has cross-community support.

Since the power-sharing arrangement broke down, the British Government has been put under increasing pressure to extend same-sex marriage to Northern Ireland. Westminster insists that it is a devolved matter, and that to legislate would be tantamount to direct rule.

In 2018, Labour MP Conor McGinn and Tory peer Lord Hayward submitted identical private member’s bills to legislate for same-sex marriage in Northern Ireland. So far the bill has failed to progress through the Commons.