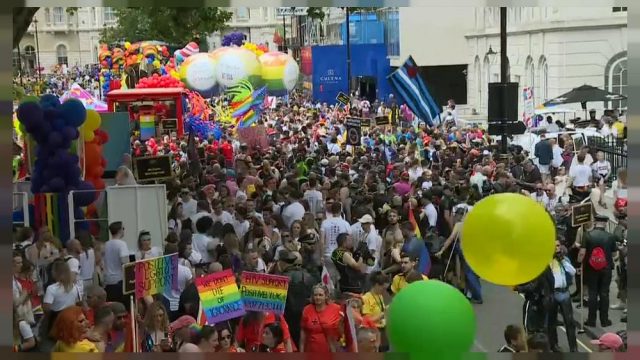 Watch more on the London Pride Parade by clicking on the player above.

Thousands of people flooded the streets of London on Saturday as the 2019 Pride parade kicked off in the British capital.

“This year’s Pride in London parade will be the biggest and most diverse yet, with 30,000 people from all parts of the LGBT+ community marching through the capital today to celebrate, protest and stand up for equality,” organizers said on a dedicated website.

This year’s edition marks the 50th anniversary of the Stonewall uprising that brought the issue of gay rights to the attention of the world.

“In this momentous anniversary year, we must all take stock of how far we’ve come – and of the contributions and sacrifices made by trans women of colour to get us to where we are today,” said Alison Camps, Co-Chair of Pride in London.

Early on June 28, 1969, patrons of a Greenwich Village gay bar called the Stonewall Inn rose up in defiance of police harassment, triggering days of rioting.

Their resistance gave birth to the national and global movement for equal rights for lesbian, gay, bisexual, transgender and other queer people.

This year’s parade route will go from Portland Place down to Whitehall, via Regent Street, Piccadilly Circus and Trafalgar Square, organisers said.

“As we take to the streets of London once again, it’s vital that we remember that Pride is not just one day a year – we must fight for the rights of all members of our community all year round,” Camps said.