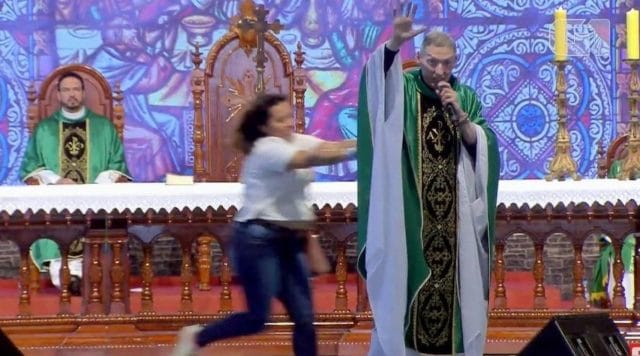 An anti-gay Brazilian priest who is celebrated in the country for his lively sermons was violently pushed from a stage on Sunday while delivering mass in Cachoeira Paulista, São Paulo.

Shortly before 3 p.m., a woman was able to rush past security and push Father Marcelo Rossi off the stage during a ceremony at the headquarters of Canção Nova.

Video footage showed Rossi toppling from the stage as onlookers watched on in horror. The woman appears to be smiling after his fall.

Rossi was delivering an address during the closing ceremony of a youth camp which had an estimated 50,000 attendees.

The Catholic priest was not seriously injured and was able to return to the stage to complete his sermon, which was being streamed online.

The unidentified woman was detained by the local police.

Brazilian news portal G1 reported that the 32-year-old attacker traveled to the youth event from Rio de Janeiro. She is believed to have mental health problems, police noted. Rossi declined to press charges.

Rossi has made numerous anti-gay statements throughout his career. In November 1998, he said, “A lot of ideas will change the day homosexuality is proven to be an illness.” In a 2014 interview, he said, “Sex between man causes pain, if something causes pain, it can’t be a good thing.” He has also opposed same-sex marriage because, “The word of God is clear that man and woman were created to unite and bear fruit.”

In a short statement, Canção Nova said it regretted the incident, adding: “The priest is well. He was attended by the medical staff at the event and presided over the celebration to the end.” In a short video after the mass, the priest said he just suffered some pain but nothing was broken.