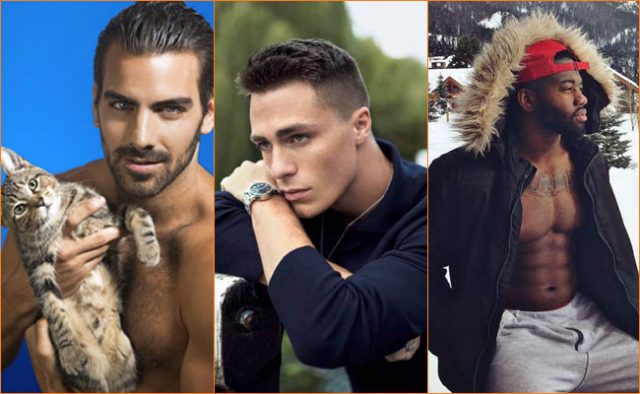 Every day someone helps further LGBTQ acceptance by coming out and proudly proclaiming who they are for the very first time.

We’re celebrating National Coming Out Day with a look back at these 17 people who bravely kicked down the closet door in 2016 and helped change the world for the better by simply being themselves. The legendary pro skateboarder came out as gay in a Vice Sports mini-documentary. “I consider myself a skateboarder first, gay second,” he said. “I’m a skater, that’s all I know.” The actor/model ended years of speculation about his sexuality this year when he came out to Entertainment Weekly in May and opened up about the difficult journey he’s had on the way to becoming a totally out and proud gay man. Following in the footsteps of her sister and directing partner Lana Wachowski, The Matrix and Sense8 co-creator revealed she is also a transgender woman and encouraged a new approach to the way we discuss the concept of gender.

“We need to elevate the dialogue beyond the simplicity of binary,” she said in a statement published by the Windy City Times. “Binary is a false idol.” Queen Elizabeth’s cousin is the first member of British Royal Family to utter the words, “I’m gay.” Lord Ivar Mountbatten came out in an interview with the Daily Mail in September.

“When I was growing up, it was known as ‘the love that dare not speak its name,’ but what’s amazing now is how far we have all come in terms of acceptance,” he said. “Proud to be a raging homosexual. It’s taken 20 years of suffocating in the closet for me to become comfortable enough to say it, but now I can finally breathe. I did it!” the 20-year-old singer revealed on Instagram in June. He made history as the first deaf contestant to compete on America’s Next Top Model and then made his legions of queer fans very happy when he stated that he is sexually fluid after a fan tweeted him asking if he liked boys or girls. Finally, after 27 seasons, Mr. Burns’ right-hand man kicked down the closet door and officially ended the longest coming out story in history in the April 3rd episode of The Simpsons. In a moving interview with OutSports, the Montana State football and rugby player opened up about the difficulties of being an out college athlete.

“My name is Brandon Davis, and I am a proud gay African-American athlete,” he said. “There’s no better copy than the original, and there is no better feeling in the world waking up without having to put on a mask. Know who you are and be yourself, you only get one time to be alive so don’t waste your years being a replica of what society wants you to be.” Teen Wolf and Desperate Housewives heartthrob Charlie Carver started off the year with a bang by coming out as gay in a touching five-part essay on Instagram and noted his identical twin brother, Max, “is just as cool for being straight.” The Parks and Recreation star, who also voiced the Internet’s most famous feline in Grumpy Cat’s Worst Christmas Ever, came out as bisexual in an interview with The Advocate. Stephanie Beatriz took advantage of Aubrey Plaza’s coming out to reveal she swings both ways as well. The Brooklyn Nine-Nine star tweeted a link to Plaza’s comments about falling in love with both sexes with a simple, “Yup.” She then followed up after a fan asked for clarification with another tweet that read “yes y’all” and included an emoji of a man kissing a woman as well as one of two women kissing. The college basketball player from rural Arkansas came out as gay and bravely discussed being a survivor of sexual assault in a heart-wrenching piece he penned for OutSports.

“It’s important to me to share this now because I know many other guys have been in similar situations,” he wrote. Christian rock singer Trey Pearson boldly came out in an emotional letter that fueled a feature on him in 614 Columbus magazine.

He wrote, “To make an extremely long story short, I have come to be able to admit to myself, and to my family, that I am gay.” At a town hall event in London earlier this year, the courageous British university student came out as a non-binary person to President Obama and a room of 500 people. Munir expressed the need for world leaders to “take us seriously as transgender people” and has since gone on to further speak out for transgender civil rights. Bronx City Councilman James Vacca fiercely came out as gay via Twitter with the added fabulosity of a Golden Girls reference.

“After talking w/ my friends & family I’ve decided to come out publicly as a gay man. Now back to the Golden Girls!” he tweeted. Best known for playing the bisexual character Callie Torres on Grey’s Anatomy, actress Sara Ramirez also revealed that she is also a bisexual person herself in a powerful speech at the True Colors 40 to None summit.

“I am deeply invested in projects that allow our youth’s voices to be heard, and that support our youth in owning their own complex narratives so that we can show up for them in the ways they need us to,” she said. The only child of singer Sade came out as a trans man on Instagram, proudly proclaiming “today is the first day of the rest of my life” along with the hashtags #shotday #firstshot #finally #ftm #selfmademan #transman #proud and #yaaassss.

While he has yet to publicly reveal the name he would prefer to use, we welcome him to LGBTQ.