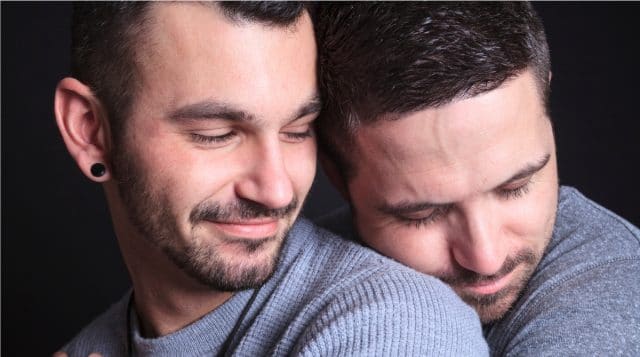 “Good morning,” Paul called out to his neighbour.

Mrs. Gasper turned around with a smile on her face, but the smile swiftly turned into a frown when she saw Paul. She ran into her apartment as if she had seen a ghost.

A wave of pain surged through Paul as he walked back into the apartment he shared with his boyfriend. Mike was in the kitchen, making breakfast when Paul walked in. Paul was olive-skinned; he had black hair with green eyes. Mike was tall and muscular. He had blonde hair, blue eyes and an athletic body.

Mike noticed the sad look on Paul’s face, and it broke his heart.

Within months, Paul lost his friends and even his job. They were also attacked by some hoodlums one night, and Paul had broken an arm during the attack. Mike was in love with Paul, they had been together for only a year, but he knew Paul was the one he wanted to spend the rest of his life with.

Mike pulled Paul into his arms and planted a soft kiss on his lips.

“I love you too,” Paul replied.

Paul was also in love with Mike, but he couldn’t understand why society won’t accept their relationship. He placed his hands on the sides of Mike’s handsome face and kissed him.

“I don’t want to lose you,” Paul whispered.

“You won’t,” Mike replied, “Breakfast is ready, come and eat,”

Mike led Paul to the dining table and pulled him onto his thighs.

When they were done with their breakfast, they started to make out.

Paul ran his hand along Mike’s arm and kissed his neck. He could hear Mike’s heartbeat, and the warmth from Mike’s body was seeping into his. They went into their bedroom and undressed each other.

Then they went into the bathroom, and Mike turned on the shower.

They took turns to bath each other and made passionate love in the shower. Afterwards, they dried each other’s body with a towel and lay on their bed. Paul glanced at Mike who seemed to be lost in thought.

“What’s on your mind?” Paul asked.

Mike watched Paul fall asleep, and he tiptoed out of the room. He was excited and nervous at the same time. By the time, Paul woke up; Mike had executed his plans. Paul looked around the room but couldn’t find Mike when he woke up. He saw petals of red roses on the floor, leading into the living room.

Paul followed the trail of roses into the living room, Mike was in the living room, and he had a nervous smile on his face. There was an ice bucket with a bottle of champagne near the sofa, and Paul wondered what the celebration was. Mike walked to Paul and went on his knees and then he brought out a ring box from his pocket.

“Paul, will you marry me?” Mike asked, “I promise to always protect you and love you forever,”

Mike stood up and slid the ring onto Paul’s finger. He embraced Paul, happily and they shared a kiss.

“This is a beautiful surprise,” Paul said, “I love it,”

“We are going to be married!” Mike said, happily.

Mike opened the bottle of champagne and poured two glasses for both of them.

“I love you, Mike, you are my world,” Paul said and clicked his glass against Mike’s.

My first gay experience as a straight guy