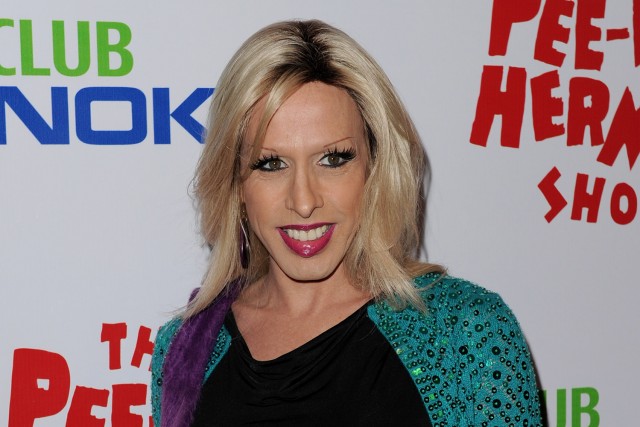 Alexis Arquette comes from a famous family of Hollywood actors including siblings Patricia and David. As a young actor, she often appeared in androgynous roles, and later went on to front mainly indie and low budget films. Her acting career has been representative of her own personal journey, as she continued to play ambivalent characters and drag queens. She later transitioned, filming a documentary in 2007 called ‘Alexis Arquette: She’s My Brother’. Known for her uncompromising views on Hollywood, and often willing to spill the beans others prefer to play coy about, she grabbed the press when she revealed that she had slept with Jared Leto before her transition. However, she’s at her most forthright when discussing trans representation in the media, and people whose interest in her transition is purely voyeuristic, as she explained in a recent out.com interview.

“I’m tired of the representation of trans people. It’s not black and white. There are so many gradations. I’m annoyed with people affiliating gender with sexuality exclusively. People want answers. “Oh, I was gay since birth.” I don’t have the answers.” She’s keen to stress this opinion – that gender is not binary, but fluid, and that there are a multitude of possibilities. Like many other famous trans women, she is often expected to have the definitive answers on trans experience and gender more generally.

Alexis also calls out the voyeuristic nature of people whose interest in her transition relates more to her surgery or anatomy than her lived experience. Alexis walks an interesting line between the desire to have control over her own representation and the notoriety her fame brings her. She tells out.com that she gave up being producer on her own documentary as you “can’t be the subject of your own documentary”, a decision she regrets, but she wryly notes that Marc Jacobs attended the screening, so it wasn’t “all bad”.

She’s kind when discussing her sister Patricia’s success with recent movie ‘Boyhood’, although one wonders how close the family is. Alexis herself doesn’t act much these days – in fact, she’s been without an agent for 12 years, and only takes a role when the producers come calling. As she says, her career speaks for itself: “You know my work. If you’re interested in me, make that offer, and I’ll be there that day.”

Whether dishing the dirt, or calling out the crassness of media, Alexia Arquette remains one of Hollywood’s more interesting celebs, and it’s always worth waiting to hear what she has to say next.