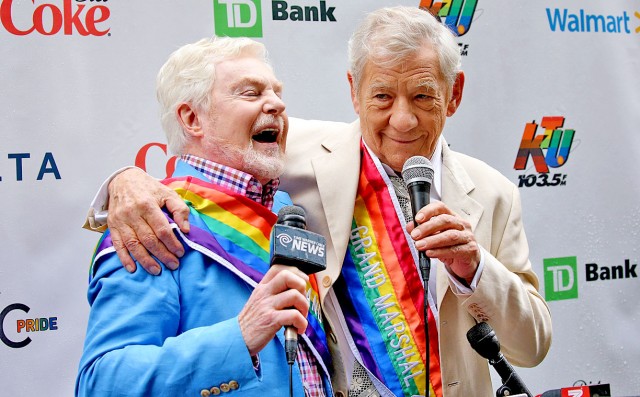 At first, he has been one of the most powerful mutants then he embodied the wisest and the most legendary wizard in Middle-Earth, but before doing all that, Ian Mckellen had a whole world to deal with and his journey was long and arduous. The 76 year old actor says that his decision to openly admit his sexual orientation at the age of 49 (in 1988) was one that made him a better actor and person and that he wishes he would have taken this important step sooner than that. He stated “I regret and always shall that I didn’t see the significance of coming out at a much earlier date, because I think I would have been a different person and a happier one.” Part of the fact that prevented him from doing so, however, was initially the shame that he felt about his situation. The actor admits that his homosexuality wasn’t something he was particular proud of, which is why he always tried to hide this part of his life. Aside from that, the teenager Ian Mckellen, living in UK in his mid 20s, had to face a society that prohibited gay behaviors. “Back then, you did not advertise your sexuality, and if you wanted to be open about it, you went to a private place”. In order to have the chance of working on Broadway, he had to lie about his sexual orientation and declare himself as straight. It was only later, when the acting industry included honesty in their policy that the reputed actor decided to reveal his true nature. “I think up to that point I had been using acting as a disguise – somewhere where I could express my emotions, and draw attention to myself in a way that I didn’t particularly want to do in a real life. Acting became not about disguise, but about telling the truth. And my emotions became much freer. I was able to act better as I think you are able to do any job. Everyone’s better if they’re being honest”. A lot of things changed since then and the actor became involved in almost every aspect of the LGBT community, supporting people facing harsh times because of their sexual preferences. One of these special projects, Ian Mckellen reveals, was the X-Men series. In an interview in February 2014, he said “I was sold by Bryan (Bryan Singer, the director) that mutants are like gays. They’re cast out by society for no good reason. And, as in all civil rights movements, they have to decide: Are they going to take Xavier line – which is to somehow assimilate and stand up for yourself and be proud of what you are, or are you going to take the alternative view, which is, if necessary, use violence. And that’s true. I’ve come across that division within the gay rights movement.” The great actor is now happier than ever and his message to the world is an urge towards love, acceptance and honesty: “Self-confidence is the most important thing that anybody can have. You don’t have that if part of you is ashamed or hiding something. I can reassure people who don’t feel they’re able to, the world will like you better because people like honesty and authenticity.”