Home Gay Stars Sharon Needles – how to glamorize a nightmare 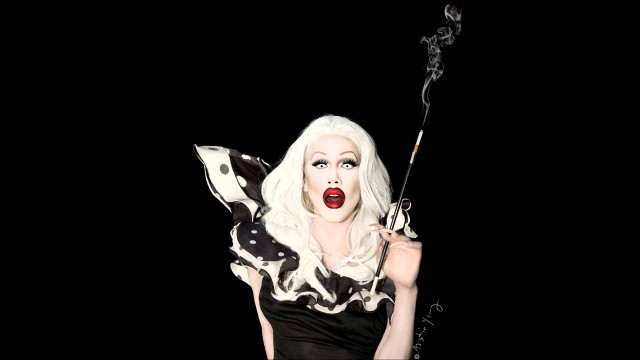 Ghoulish glamorous Sharon Needles spoke to out.com last year for Halloween, but we think it’s worth exhuming some of that interview as we get into the seasonal mood.

Unless you’re one of the few people left who’ve missed out on ‘Ru Paul’s Drag Race’, you’ll know that Sharon (occasionally haunted by the ghost of Aaron Cody) was the spectacular winner of the fourth season of the reality TV competition. Since then she’s remained a firm favorite among fans, and has gone on to enjoy a career that’s seen her release one album, ‘PG-13’, with a second, ‘Taxidermy’, on its way. She’s also been the face of PETA and makes regular appearances at live events. One of these, ‘RuPaul’s Drag Race Night of the Living Drag’, was the subject of her out.com interview.

We were all keen to hear how the queen of glamorous goth celebrates Halloween when every day is like a trip through a B-movie monster marathon, and we weren’t disappointed to hear that she “went from being a bullied young kid who loved Halloween to someone who makes nothing less than $10,000 on Halloween.” In keeping with that mental image, she revealed that her entrance on the night would see her emerging from a coffin as Joan Crawford. It’s good to see that her tastes haven’t changed and she remains as outrageous and willing to shock as ever.

When asked what the scariest thing about drag queens is, Sharon reveals the mystical heart of her gruesome mystique, and even waxes a little mystical:

“The scary thing about drag queens is our power to completely manipulate people. We really are sorceresses. We can make people think we’re beautiful, and graceful, and entertaining, and funny, and sexy, when really, underneath that Bride of Frankenstein is a mad scientist pulling all the strings. The really scary thing is how good we are at manipulating people and selling them pure bullshit.” If anything sums up Sharon’s approach to drag so far, this is it. Even at her spookiest, she seduces and hypnotizes her fans. Coming on like a zombie Madonna, she taps into the kitschiness of Halloween that makes it bigger than Christmas for many gay men.

She always remains fiercely in control of her own chic. Sharon has always had a punkish, DIY ethos since her earliest days as a performer, and she seems to retain that outlook. When asked what three items are essential for a Halloween outfit, she remains true to her roots: “A hand-crafted costume. No store-bought costumes. I have no tolerance for store-bought at all. True vintage Beistle die-cut Halloween decorations. And of course, on a chilly October night, the most important thing is alcohol.”

She goes on to talk about her favorite Halloween parties living in a squat with “post-punk hippies”, a giant mansion lit by bonfires as the electricity had been cut off. This post-punk, don’t-give-a-fuck attitude pervades everything she does. It remains to be seen what events she’ll be haunting this year, but you can bet they’ll be spine-tingling good.