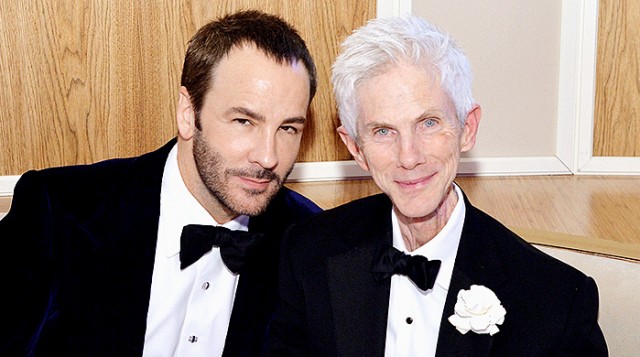 After 27 years of relationship, famous designer Tom Ford revealed that he has married his partner Richard Buckley, in an interview ‏at Apple’s Regent Street store, last year.  Tom met Richard Buckley, a magazine editor when he was 25 years old at a fashion show. It didn’t take them much to decide they want to live together and as little to get married. Ford didn’t tell exactly when they got married, he just declared that the event happened in the US:

“I lost so many friends in college — I would say more than half of my closest friends,” he said. “Richard, my partner of 27 years, had also gone through something also quite tough in his life. We are now married which is nice. I know that was just made legal in the UK which is great; we were married in the States.”

The relationship between Tom Ford and Richard Buckley was presented in Out magazine, Feb. 2011 LOVE ISSUE where they both narrate their love story. Ford describes how intimidated he first was by Richard, 38 when they met at a fashion show back in 1986 and how he decided that he was going to marry him in an elevator ride. What happened was that Ford was sent to Women’s Wear Daily, the magazine for which Richard was working, and there they met again, ten days after the fashion show in New York. Ford bumped into Richard in the building’s elevator and that was the beginning of their love story that would last forever. This is how he begins the narration: “You can look at someone and feel like you’ve known him forever. The first night I ever had drinks with Richard I felt I knew everything about him. He has the wildest eyes — like an Alaskan husky. They’re not blue, they’re not gray, they’re a color you’ve never seen before — they approach silver.”

For Richard it was love at first sight too, as he noticed young Tom at the show but he was not sure about what was going to happen. Richard was in a relationship, not a serious one and he was insecure about getting involved as he was so captivated by his two jobs and New York’s busy lifestyle. Yet, it was Richard who invited Tom at a dinner party at fashion designer Cathy Hardwick. It’s important to mention that Tom was Cathy Hardwick’s assistant. He didn’t show up at that party and Richard went on trying to get a hold of Tom, he talked to Cathy Hardwick about this and she arranged a date between the two of them.

The chemistry between the two of them unfolded rapidly during their dates and it wasn’t long until Richard gave Tom the key to his apartment in a little Tiffany box. Richard describes how he felt about Tom and how he decided to give love a chance:

“ I’d been through a lot of relationships and was very suspicious of a lot of things, but with Tom I was careful not to repeat the mistakes I’d made with other guys. I’d been burned many times and had learned to keep people at arms’ length. And on New Year’s Eve 1986, we didn’t go out. We stayed at my little apartment on Saint Mark’s Place. I gave him a little Tiffany box, and inside was a key to my apartment. He moved in the next day.” Their love story as they are narrating it is one of the most beautiful you could read and it does have the flavor of a fairytale, just that it’s real which gives hope to real love.

In 2012, the couple had their first child Alexander ‘Jack’ John Buckley Ford, which changed Ford’s lifestyle a little as he declared that now he is more careful about his behavior:

“I used to spend most of my time at home naked, but now we have a child it means we have a nanny and so I can’t come downstairs naked and have a bowl of cereal in the morning,” he admitted in front of the crowd during the interview at interview ‏at Apple’s Regent Street . “Before I had a child I literally took off all my clothes the minute I walked in the door.”

Tom is now 54 years old and his husband, Richard is 68 and they are as happy as they could be, celebrating love everyday.